Private Walter Gilbert Harrison was born in the spring of 1888 in Sheffield. His father, Walter senior was born in Newark where his father was an engineer. Aged 13, he was a boarder at a small privately run school. The school, on Middlegate, had 13 boys between 10 and 15 and its proprietor was a ‘Literary Author and Schoolmaster’.

After leaving school, Walter found work as a grocer and in 1881 he was working in Nottingham and living in the household of Sarah Doughty, along with three other young male boarders, two of whom were also grocers. Perhaps it was in the grocer’s shop that Walter met Margaret Alice Wilde a farmer’s daughter. Walter and Margaret married in 1887 at the parish chuch of Kegworth which was her home town.

Walter Gilbert was baptised at the Parish Church three weeks after his birth on 20th May in a house on Havelock Street in Broomhall.  In 1891 the family was living in Brightside where Walter senior had established a business as a grocer and corn dealer. Ten years later, the family had set up home on Glossop Road although Walter senior was away in Caistor at census time.

Aged 22, Walter Gilbert was working as a clerk in the estate office of Clumber Park and boarding with John and Mary Hall in the village of Hardwick near Worksop. Perhaps his father’s contacts with in farming helped Walter Gilbert in securing this postion. He moved frequently, his obituary mentioned that he was ‘became the agent for the Locks Ash Estate near Emsworth in Hampshire’. At the outbreak of war he had retruned to Yorkshire and was the steward at Stanley Farm near Knaresborough. From here it was a short journey to Harrogate where Walter Gilbert attested in December 1915. 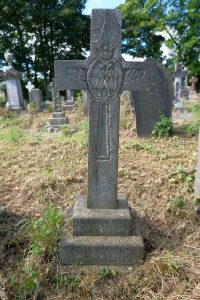 Walter Gilbert joined the 15th Battalion of the York & Lancaster Regiment in February of 1916 at the Colsterdale Camp which was about five miles west of Masham. His medical record describes him as being 5 feet 8 inches tall and weighing just over 9 stone and generally in good health.

After initial training he emabrked for France arriving et Etaples on the 1st July the first day of the Battle ofd the Somme. Two weeks later he was sent to join the 7th Battalion of the South Lancs Regiment.

He was injured and died of the wounds inflicted on 20th July 1916 aged 28 years. He is buried at Dartmoor Cemetery, Becordel-Becourt about 3 kilometres east of Albert. His headstone carries the inscription: “Peace Perfect Peace“ for which his parents paid 5 shillings.

His parents’ grave at Fulwood also has an inscription on (there is a discrepancy between this and the CWGC as to his battalion):

Walter Gilbert’s sister had been drowned whilst staying on Anglesey so their parents had suffered a double tradgedy within a week. The parents remained in the house on Glossop Road until their deaths, Margaret dying in 1926 and Walter in 1938.

Through their  lifetimes the Harrisons of both generations had little or no link with Fulwood. It is only the grave of the parents and its inscription that qualifies Walter Gilbert for inclusion in this online memorial.