These biographies have been created using publicly available sources. These include census records, records of births, marriages and deaths along with their equivalent church records and local newspapers. Service details comes from on-line databases, often created by intereste groups and individuals.

Service records are not freely available as they are retained by the Ministry of Defence.

Only rarely are personal letters and diaries still existing and available to view. However school records for some of these men are available, especially if they person went to a public school.

The lack of personal records means that these biographies are basic in terms of discovering the person. In many cases the men were young, barely out of their teenage years and so had not had a chance to establish themselves. This is why these biographies often feature their families as a much as the person so as to give some insight to the influences on the young man has he grew up.

But the lack of evidence is certainly not evidence of lack. For these young men life was full and exciting. They had a sense of humour, they had friends and were members of sports teams. They sang and told stories. They fell in and out of love. It is important when visualising them to think of young people you have known and so imagine them as lively, friendly people. All this makes their untimely deaths all the more tragic. 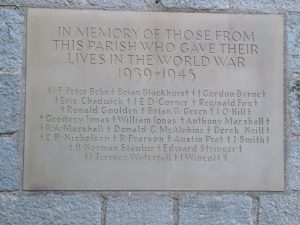 There are 22 names of men who died in the second world war recorded on a plaque by the south door of the church. There are 23 names on the plaque but two entries appear to be for a man named Marshall. There are also eight graves in the churchyard with memorials to men killed during the conflict.