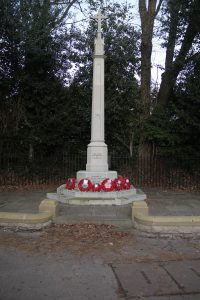 Many towns and villages have memorials to the men who died in the First World War and Fulwood is no exception. Soon after the end of hostilities, an open meeting was held in Fulwood to decide upon a suitable memorial. Four suggestions were identified: a trust fund to support returning soldiers and families of men who died, endowment of a bed at the Royal Hospital; erection of a public hall, an open space for the children of Fulwood. A group, that was to include two soldiers, was appointed to take these ideas forward.

The group reported in November 1919. Charles Laycock of Stumperlowe Grange explained that the group had “arranged a scheme for the erection of a large memorial cross upon a clearing which was to be made in the plantation at the corner of Canterbury Lane and Fulwood Road The land had already been given by Mr. Dixon and at that meeting it was to be decided whether this scheme, which would cost about £1,200, was to be proceeded with, or whether a modified scheme should take its place, or finally whether the matter should be dropped altogether.” (Daily Telegraph 5 November 1919.) Henry Paterson, an architect who lived on Clarendon Road, presented a sketch of a memorial.

It is not clear from the report whether the group gave reasons for dismissing the original four suggestions but as the location had been chosen anddonated, there is something of a fait acompli about all this.

The memorial was unveiled on 19th March 1921 by Lt Col Henry K Stephenson.

In 2014 the Sheffield Council took on reponsibility for the memorial, along with most others in the city, and arranged for it to be cleaned and repaired.

Each year the Fulwood Scout Group holds a Remembrance Sunday Commemoration at the Memorial.