Corporal George Hartle has proved to be elusive in the records. Through the census records we can tell that his parents were Joseph Henry and Alice Hartle and that George was born in November 1866. He was baptised a month later at the Parish Church. At the time the family was living on Gloucester Street in Broomhall but from the turn of the century the family lived in Nether Edge.

Hartle was employed by his father, an auctioneer specialising in licenced premises. In 1912 he was engaged on the transfer of the licence of the Oxford Hotel in Oxford Street from Joseph Pickering who had died to Lily his widow. George and Lily became aquainted and from October 1911 they lived ‘as man and wife’ as Lily said at the subsequent trial.

In June 1912 Hartle stole £30 from Lily that she had from a money lender. He then  disappeared. He was arrested in Lincolnshire and tried at Sheffield. He admitted guilt but most of the money had been spent on drink and there was only £3 left. Lily was left destitute, living on the charity of friends. Hartle was sentenced to four months in prison. 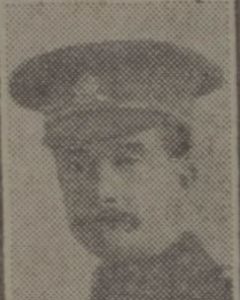 Hartle enlisted early in the war and was with the Duke of Wellington’s Regiment which saw action in the Gallipoli campaign. He was killed on the 10th August 1915 and buried at sea (according to the memorial at Fulwood.) He is commemorated on the Helles Memorial along with nearly 21,000 other combatants. The memorial notes that his rank was Corporal.

The Sheffield Daily Telegraph briefly reported on a memorial service held at St Barnabas’s Church on 25th August, noting that two of George’s younger brothers were Assistant Scoutmasters with the St. Barnabas troop which was present in full muster. Whether the Troop’s presence was because George was associated or to support the brothers isn’t clear but the latter scenario is the more likely. The reporter also said that George was a respected member of the church so his troubles of 1912 seem to have been an aberation, though one that caused substantial hardship to Lily Pickering and her children.

His entry in this list is due to the inscription on his father’s grave in Fulwood Churchyard. Joseph Henry died in 1916. George is also commemorated at St. Barnabas Church.

In loving memory of Corporal George Hartley,
loved and eldest son of Joseph Hartley died of
wounds at the Dardanelles August 10th, 1915 and
buried at sea aged 29.