Thomas Harrison came from a family that was rooted in Fulwood. His grandfather and great-grandfather were farmers on the hills near Lodge Moor. In due course his uncle Henry inherited the farm at Rivelin Lodge and William who was the third son had to find employment off the land. He found work as a quarryman and by the time Thomas was born in 1899,  William and his wife, Alice, were living on School Green Lane. Ten years later and now with seven children, the Harrison family was occupying a four room cottage in Glen View, Hangingwater Road. Some inhabitants of Glen View described it as a court which is term often used for housing that surrounded a courtyard.

When Thomas attested in October 1916 he gave his address as 39 Bramwith Road. 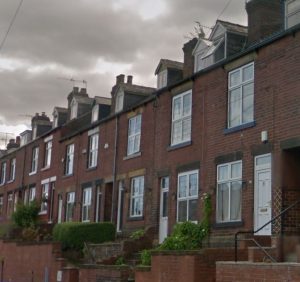 39 Bramwith Road (on the right)

Thomas was mobilized in March 1917 and was recorded as being of average height and a “driller” which is probably associated with one of the many local quarries. He had some scars on his hands which may have been  from accidents associated with his work and a ‘convergent squint i his left eye. 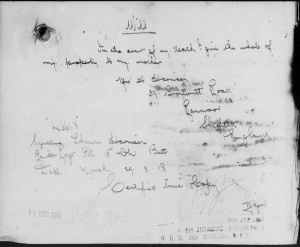 After initial training with the 8th Battalion of the West Riding Regiment he was transferred to the 264 infantry Battalion of the Kings Own Yorkshire Light Infantry and three months later in March 1918 he was transferred back to the West Riding Regiment. He embarked for France at Folkestone on 27th March 1918. There is an intriguing note that he ‘reverted to private’ on embarkation. His service will hastily drawn up at the time metions the rank of signalman. The day after he arrived in France, he was moved to the Northumberland Fusiliers and transferred again to the Durham Light Infantry in June 1918.

Thomas was killed on the 24th August 1918 during the ‘100 days offensive’ period of intense activity that would end in the Armistice and is commemorated on the Vis-en-Artois Memorial which is about 10 kilometres south-east of Arras.

Thomas’ service record service survived the fire that destroyed the majority of servicemen’s records in 1940 (this was an accidental fire not caused by enemy bombing) and from these we know that the his parents received his British War Medal in 1919 and the Victory Medal in 1921.

The most interesting document in the collection is the sent by the infantry records office in York prior to ‘officer in charge of records’ being ‘enabled to dispose of the placque and scroll in commemoration of the soldier named overleaf.’ Alice Harrison, Thomas’ mother, lists all the relatives within the family although the rubric was clear that grandparents, uncles and aunts were not to be listed as there were siblings of Thomas living. Most of Alice’s siblings along with her mother were in London (although she had been born in Lincolnshire)  while her husband’s family were nearby. Her family now included Mary (born 1913) and Mary (born 1917). The scroll duly arrived in June 1920.

WIlliam and Alice moved onto Carr Bank where in 1939 they were sharing their home with Mary, Margaret and Rose and her husband.

William is buried in Fulwood in a grave that was shared with two men called Grayson. There is no mention of any members of William’s family on the headstone.