Private John Etchells was the eldest son of John & Mary Margaret Etchells of Crookes. John senior was a spring knife cutler as had been his father, also called John. Grandfather John and his son, John, lived in Crookes all their lives and Grandson John grew up there. He also followed family tradition in becoming a spring knife cutler.

In 1912 he married Ethel Gregory at St Mary’s Walkley and together they set up their home at 28 Rivelin Street. Two sons were born there, Lewis in 1913 and Eric in January 1917. 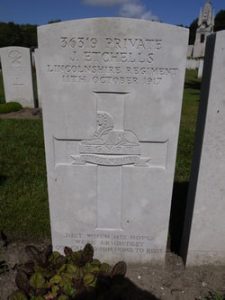 John served in the Lincolnshire Regiment. He died of wounds on 11 October 1917 aged 27 years.

His grandparents are buried in Fulwood and some of the family of his uncle George are also buried in the graveyard. His name also features on the Roll of Honour of St. Thomas’ Church at Crookes.

In1919 on the aniversary of death both his wife and his parents had ‘in memorium’ notices published in the Sheffield Independent.

Ethel did not marry again. She received a pension of 13/9d for herself and 9/2 for each of the boys until the reached 16.

In 1939 she was still living on Rivelin Street and Eric who was living at home was a draughtsman with a railway engineering company.

Lewis married Winifred Glaves in 1937 and in 1939 was employed as a ‘marker out’ in a heavy steel company.

It is John’s cousin Joseph is also commemorated on the memorial at Fulwood.