Austen Malcolm Gascoigne was born in 1916, the second child of Holland and Florence Gascoigne (nee Wilkes)

Holland Gascoigne had a difficult start in life. His mother was unmarried and his first name may be a reference to his father. By 1871, Holland now three years old was being cared for by Ann Gill, a widow with three sons of her own. Ann continued to look after Holland who, when he was 13, was contributing to the household budget as an errand boy.

As he grew up, Holland developed fine singing voice and adverts appeared in the local papers for concerts where he performed, such as one at the Cutlers Hall in 1880 when he was only 12 years old and another a two years later when the bill advertised “Master Holland Gascoigne, Irish Comic Singer” as appearing at a concert at the Vestry Hall on West Bar.

Like many young people of the time, Holland attended evening classes. He attended and advanced class in animal physiology gaining a second-class result in the end of year exams. This determination to educated himself enabled him to secure the post of School Attendance Officer which he held until he retired in 1932. Holland was actively engaged in politics for many years, both as member of the Hallam Liberal Association and as the treasurer of the Trades Council.

Unfortunately, we know very little of Austen’s childhood or young adulthood. His family lived on Carr Bank Lane, a house that Holland had occupied since at least 1906. His elder brother died in 1937 ‘after long and silent suffering’ a phrase that may suggest he died of Tuberculosis. The younger Holland was a ‘stalwart opening batsman for the old Nether Green Amateurs Club, of which he was one founders’ wrote the cricket correspondent in the Star Green ‘un and went on to declare that he partnered Holland regularly and would miss him greatly.

The brief details of Austen’s family are all that we have to build a picture of his background.

We do know that Austen was a scout with the 36th Sheffield Troop, based at St John’s Church Ranmoor. 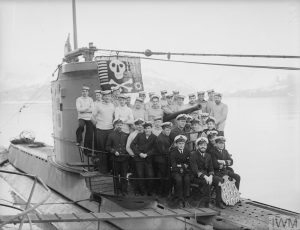 HM Submarine Utmost returns to Britain. 6 February 1942, from a year’s service in the Mediterranean.

When WW2 broke out, he was 23 years old so may have joined up before then. In May 1942, the London Gazette recorded that “Leading seaman Austen Malcolm Gascoigne” was mentioned in despatches. The rank of Leading Seaman followed two lower ranks of ‘Ordinary Seaman’ and ‘Able Seaman’ so he was clearly competent and experienced. Being mentioned in despatches recorded that he had shown initiative and courage under dangerous conditions. So he may well have been a member of the crew of HM Submarine Utmost when the picture was taken

By late November 1942, he was member of the crew of HM Submarine Utmost which left Malta for a patrol in the Mediterranean that month. On the 23rd, she sank an enemy ship, but on 25 November 1942, during her return journey to Malta, she was located, attacked and off the sunk south west of Sicily by the Italian torpedo boat Groppo.

Austen Gascoigne’s name is inscribed at the memorial at Chatham and the memorial plaque by the south door of Fulwood Church.