Gerald Frederick Charles Chatt was born in 1915 at Newcastle Upon Tyne. His father, Joseph, was working at the time for the an Insurance Company in the City and the family lived in Jesmond. Joseph had married Betsy Spittle in Newcastle in 1907 but Gerald who was born eight years after the marriage was their first and only child.

In 1919 the family moved to Sheffield when Joseph was appointed as the manger of the Yorkshire Insurance Company’s office in the city, a post he held until is death in 1934. We don’t know where he was educated as a child but he did attend Sheffield University where he played hockey. In his first term, the team beat the city team by five goals to four with Chatt scoring one goal. Five years later he was playing in a trial for the Yorkshire County Hockey Association.

After graduation, Chatt pursued a legal career though when war was declared he had not completed his training. He joined the Royal Signals Regiment.

Gerald Chatt died on 26th August 1942. There was an inquest which was reported in the Yorkshire Post:

At an Inquest on Second Lieut. Gerald Frederick Chatt (26) who was found shot at his billet in York, the City Coroner (Colonel Innes N. Ware) to-day recorded a verdict that Chatt died as a result of a self-inflicted gunshot wound while the balance of his mind was disturbed.

Captain Charles Payne of the Royal Corps of Signals, in which Chatt served, said Chatt was an extremely able officer and was highly thought of by his commanding officer. He had a very clever brain, but was slightly excitable.

Lieut. Cootes, special investigating officer in the Corps of Military Police, said that he interviewed Chatt on August 26 about cases of shoplifting during a period of two months. Lieut Cootes said that Chatt admit stealing a golfing Jacket from a shop.

As a search of Chatt’s bedroom was being instituted, Chatt went out and a revolver shot was heard a few seconds later. Articles stolen from shops were found In Chatt’s bedroom and included a dressing gown, a pair of flannels and five pairs of gloves, three pairs being ladies’ gloves.

Medical evidence allowed that Chatt died In a hospital soon after admission from extensive laceration of the brain.

It was stated that Chatt was writing a thesis on psychology. He was a bar student in civil life

The coroner said that It was quite clear that Chatt had been In difficulties with the police on charges of shoplifting spread over a period of two months. It had to be decided whether Chatt was unwilling to face the disgrace of the charges or whether he was not altogether of a sound mind. The fact that three pairs or ladles’ gloves were found in his bedroom sup grated that the latter was the case.

“He was studying psychology and that is a dangerous game unless you are going in for it properly,” added the coroner.

Chatt was buried in Fulwood Graveyard three days after his death in the grave of his parents. Betsy continued to live in the house on Stumperlowe Crescent Road until her death in 1958. 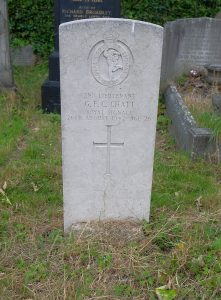