John Gordon Byrne was born in the summer of 1920 into a family of butchers. His father Armel, was the son of a master butcher as was his Uncle Frederick. Armel had served in the first world war, joining the Royal Fleet Auxillary in 1917. Armel married Annie Boardman in 1914 at Thirwell Road Methodist Chapel in Heeley. John was the third of four children.
By 1925, The Byrne family had moved into 100 Brookhouse Hill, one of the many new houses that were springing up in Fulwood, John attended King Edward VII school (KES) between 1922 and 1937 He was working as an Insurance Clerk at the outbreak of war in 1939 and joined the RAF soon after.

He was rapidly promoted through the ranks before gaining his first officer ring as a pilot officer in November 1941 and a second one eleven months later. He was a Flying Instructor, having been on numerous military operations. 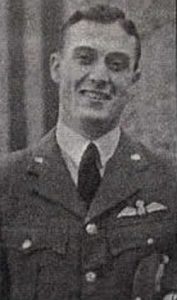 At the end of 1942, Byrne was stationed at RAF Atherstone-on-Stour and flying Wellington bombers. On the 28th December he was the pilot of a Wellington with five other crew, none of them older than 26 years. The flight should have been routine and short; its purpose, recorded as an ‘Air Test (Medical)’, was to check that Byrne who had been ill was well enough to fly. There was no wireless operator on board, perhaps because the planned flight was short, so Byrne would not have had the navigation support provided by wireless operator who would receive and understand transmissions by radio beacons that were used to locate the aircraft’s position. For reasons which will never be fully understood, the bomber hit an elm tree and crashed into a valley to the west of Bodicote, a village just south of Banbury.

Accounts of the Accident

Byrne and the crew had left RAF Atherstone-on-Stour, which is 30 miles north west of Banbury, about 11.30 am. Just before midday a boy and his mother in Bodicote saw the aircraft flying very low from the south-east, with one engine smoking. When they got down to the crash site, the boy saw wreckage which was still on fire and the bodies of several airmen.
The official accident record stated that the aircraft had flown into cloud and had then crashed attempting to land in bad weather. A more recent report by a group of amateur investigators has suggested the aircraft was flying horizontally and at high speed prior to the crash; the group cited the lack of buried wreckage and the fact that the aircraft continued for around 400m after hitting the tree. It is possible that Byrne was flying low due to bad weather, in order to get his bearings. However, the aircraft was on a direct course to the air station suggesting that he already knew his location. The eye-witness saw one engine smoking but this could have been an exhaust trail caused by the aircraft travelling at full throttle. The recent report suggests one possibility was that Byrne was flying fast and low in order to demonstrate his fitness, a manoeuvre that, as an experienced pilot, he would have completed many times.

KES School magazine carried an obituary which noted that “previous to his appointment as Flying Instructor at a station in England, he had had a successful and eventful career in the R.A.F. Having taken part in many night bombing raids on Germany and the Channel ports, he was transferred to Malta and did much good work over Italy, Sicily and North Africa. He had the honour and good fortune to represent the R.A.F. in an exchange of messages with his family in the Christmas Day broadcast of 1941. At School he was a popular member of Welbeck House and second runner in the team which won the Cross Country in 1936.”

John Gordon Byrne was buried in Fulwood at the beginning of January 1943, just five days after the crash. The grave has the burials of two other people: Hiram Herdman and his wife Adeline Gertrude (Byrne’s parents in Law – see below). There is a CWGC headstone on the grave with the personal inscription:
I THANK MY GOD UPON EVERY REMEMBRANCE OF THEE

His parents are buried in a different grave

In 2012 the residents of Bodicote unveiled a memorial to the crew at the point the aircraft hit the ground. Byrne’s widow, Beryl, and brother Armel Philip attended and the local paper reported ceremony. Beryl was the daughter of Hiram and Adeline Herdman and they lived on Whirlowdale Road. Beryl recalled that she had met John when they were both 18 at a college dance when she was taken by his ”absolutely gorgeous smile.” They married in Sheffield in September 1942 just 13 weeks before he was killed. The picture of John Byrne may well have been taken outside the church, possibly St Peter’s Abbeydale, where the marriage took place.