2nd Lieutenant John Gilbert Hall was born in 1897 into a family of silversmiths. His grandfather John was born and grew up in Wirksworth, marrying Mary Spencer there in 1844. Around 1850, John, Mary and their two children made the move to Sheffield, settling on Broad Street. John was a silversmith like his brothers Benjamin, David, Ebenezer, Joshua, Job, Samuel and Stephen who all also made the move to Sheffield and into silver manufacturing and were all living in the Park area of Sheffield. There is a biography of Ebenezer produced by the Dore Village Society which give some insight into how these brothers came to be in Sheffield.

John and Mary’s family included Joseph Hall (born 1856) who was the father of John Gilbert Hall. John died sometime in the 1860s and at the start of the next decade Joseph and his siblings along with their mother were living on Shrewsbury Road, a 5 minute walk from their uncles Benjamin, Job and Joseph. Joseph’s elder brothers, Ebenezer and John, were already silversmiths and in due time Joseph joined them. Ebeneezer and Joshua went into partnership with Richard Martin as Martin Hall and Co Cutlery and Silver-platers and it is likely that other Halls such as Joseph were employed by the company. 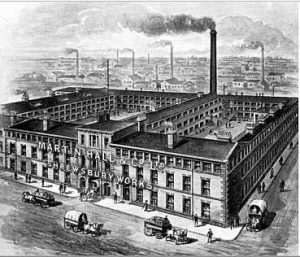 Poster of the works owned by Ebenezer & Joshua Hall.

Joseph described himself in the census records from 1891 as a silversmith’s manager. He was employed by the Martin Hall company. In 1892 he married Louisa Woodhead in Bridlington. Louisa had been married to Charles Henry Woodhead who was a spring knife manufacturer until his death in 1885.

John Gilbert Hall was born on 1st  February 1897 and was baptised at St John’s Church, Park. His sister Cicely was born two years later and also baptised St John’s. So at least initially, John Gilbert was living near his grandmother and other relatives.

Louisa died in April 1903 and John married Mary Unwin three years later.Two children were born: Arthur in 1908 and Joyce in 1910. Sometime between these dates the family moved to 178 Tom Lane.

John Gilbert attended the Manor Council School when the family lived in the Norfolk Park area and from about 1910 he was a pupil at King Edward VII school (KES). He won two scholarships whilst at the school, one which contributed to the fees and the other an award for his performance and achievements. He applied to Queen’s College, Oxford in 1915 and was awarded a Hastings Exhibition to read Modern History. The College governors also awarded him £5 in recognition of the excellence of his examination papers. 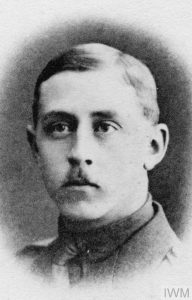 With war raging, John Gilbert delayed ‘entering into residence’ at Oxford. Instead he attested on December 6th December 1915 at Sheffield and was called up to join the ‘Inns of Court’ OTC at Lincoln Inn in London in February of the following year. The OTC had a training camp at Berkhampstead where John Gilbert spent the next year.  He was commissioned as a 2nd Lieutenant with the 6th Battalion of the West Yorkshire Regiment (Prince of Wales’s Own) in January 1917 and was in France soon afterwards. He was killed during the attack on Bullecourt on 3rd May 1917. His body was not recovered so he is commemorated on the monument at Arras.

His family were informed that he was missing but it was not until the following year that the Sheffield Daily Telegraph reported on 12 March 1918:

Still another King Edward VII. student has to be added to the roll of honour. Second Lieutenant John Gilbert Hall, West Yorkshire Regiment, elder son of Mr. Joseph Hall, of Tom Lane, Sheffield, was reported missing on the 3rd.May, 1917, and is now reported killed. He was a bright and promising youth; one of the senior Students in Edward School at Sheffield. In 1915 he gained an honorary history scholarship tenable at Queen’s College, Oxford. He had previously won a Royal Grammar School, Town Trust, and Lancasterian Scholarships. In February, 1916, he joined the Inns of Court O.T.C., was commissioned in January 1917 and proceeded to France early in March. His commanding officer writes of his death: “He was doing his duty like a man and a brave soldier in a particularly severe action.” He was only 20 years of age, and his death will be felt, by his fellow students and numerous friends.

The KES Magazine carried an obituary:

He was one of the most capable boys the School has produced—a brilliant modern language and history scholar, and no mean mathematician. He showed every promise of a brilliant University career.” He was a good all-round cricketer, and a keen and enthusiastic footballer, and took part in inter-company and regimental contests both at home and in France.

This report and the school’s obituary were used by the editors of the de Ruvigny Roll of Honour along with other details which probably came from Joseph Hall to produce a entry in the Roll that offers a glimpse of John Gilbert as a person: an intelligent and able student in many fields and a sportsman. 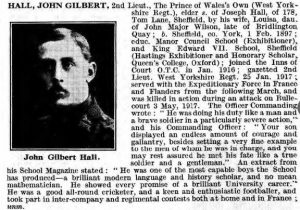 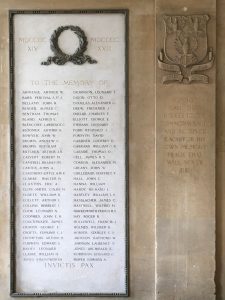 The memorial at Queen’s College

His name is also on the memorial at Queen’s College in Oxford, although he never attended.  In October 1923 the headmaster of King Edward VII School unveiled a memorial tablet on the south wall of Fulwood Church placed there at the instigation of Joseph. 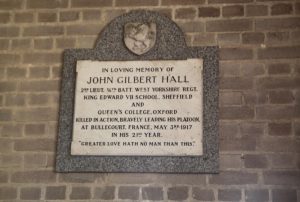 Joseph died in 1937 and a small article appeared in the Sheffield Telegraph that described him as a ‘veteran church and welfare worker’ being a superintendent of St. John’s Church Sunday School, churchwarden, a member of the Yorkshire Cricket Club and president of the Fulwood Endowment Trust. He was a man of quiet disposition.

So although we don’t know what John Gilbert was like, in these tributes to his father we may glimpse the man that he might have become.