Stoker 1st Class Lawrence Green was born at the end of January 1900, the son of Benjamin and Annie. In 1901 the family which now included a daughter Hilda, was living at 162, Chorley Street (the lowest part of Chorley Road) and 10 years later Lawrence and Hilda were with their maternal grandparents in the Mayfield Valley. No trace of Benjamin or Annie has been found in any subsequent census or other data source until Benjamin’s death in the Workhouse on Herries Road in 1931. Like

Lawrence Green joined the Royal Navy on 2nd February 1918 at Portsmouth. He told the person creating his service record that he had been a farm hand and the record tells us he was only 5 feet 2 inches. Two scars, one over his right eye and another between his shoulder blades testify that he was not averse to a scrap. However, the record says that his conduct was ‘very good.’ 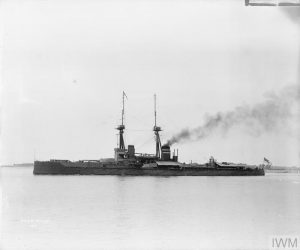 Lawrence Green died on 27 December 1918, aged 18, in the Naval Hospital at Rosyth. Rosyth was at the time one of the four Royal Naval Dockayards. From Early 1918 Rosyth was the home of the Grand Fleet which had been redeployed from Scapa Flow. Green was serving in HMS St Vincent, one of the ships of the Fleet, as a 1st Class Stoker. 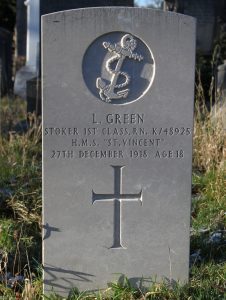 The civil register of deaths tells us that he had been suffering from Influenza for 16 days. He then developed pneumonia. The register entry above Green’s records the death of Petty Officer John Sanders who was also a stoker; Sanders also died of pneumonia. Both men were victims of the Influenza pandemic.

His sister was informed of his death which suggests his parents were not part of the family and this is borne out by the reference to his grandfather John as his next of kin on the CWGC records. He body was transported back to Sheffield where it was buried in Fulwood Graveyard on 31st December 1918. In 1929 the same grave received the body of Mary Marsden in 1929 and that of John Marsden in 1950.

A CWGC headstone was placed over the grave that states: