Norwood Fernie Greaves does not feature in many records so we know very little of him or his family. He was born in 1885 to Charles Edward and Adelaide Greaves. Two years later his sister Eleanor was born. The family features in the census records from which we can glean that Adelaide was a native of Cambridgeshire where she and Charles married in the summer of 1884. Charles was a manager in a firm of file and steel manufacturers, the term ‘steel’ may refer to the tool used to sharpen knives rather than the metal.

Charles died early in 1911 before the census was taken so the Greaves household of Norwood, his mother and sister and his mother’s sister who was supporting Adelaide through her bereavement.

Norwood married Violet Spafford on 24th April 1916 at Ranmoor Church. The marriage was announced a week earlier under the heading of ‘Engagements’ which suggests it was hastily arranged. The register recorded Norwood as being a bank cashier.  The Independent newspaper despatched a reporter to observe the marriage the event. The resulting article informed readers that Norwood and Violet were going to Buxton before Norwood ‘returned to Winchester where he holds an appointment in the Royal Field Artillery.’ These contradictory statements about his status are probably due to the haste of arranging the wedding when Norwood was called up.

The reference to holding an appointment implies that he was an officer but this contradicts the evidence on the CWGC website where is rank was ‘Gunner.’ There is further confusion supplied by an announcement in the Independent of the birth of a daughter on 10th April 1918 to ‘Cadet and Mrs Norwood F Greaves.’  ‘Cadet’ is not a rank often used but this may have been an error on the part of his wife’s family when they placed the announcement.

Amid all this confusuion, some details were correct. He was with the RFA at a training school on Salisbury Plain from April 1916 through until November 1918 when he died in Sheffield, his death certificate noting that the cause was a stomach condition on 15 November 1918 . Perhaps he was deemed unfit for service abroad and was a clerk.

Norwood is buried in Fulwood Graveyard. 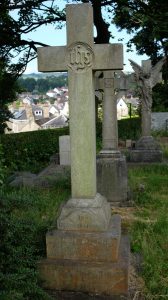 The memorial has the insciption

The CWGC notes that Norwood was the ‘Son of Mrs. A. E. T. Greaves and the late C. E. Greaves; husband of Violet R. Greaves, of Cliffe Tower, Sheffield. Born at Sheffield.’

Violet married William Bracewell in 1935. Bracewell was for many years the vicar of St Mary’s at Brammall Lane.