2nd Lieutenant William Reginald Favell was the son of Richard, a surgeon, and Ada Favell of Belmont House, Glossop Road. One of four children, William was the second child  and was followed by two girls, Edit and Ada. His elder brother was called Richard Vernon, his first name being that of his father and grandfather who were both physician and surgeons, a profession that Richard Vernon entered.

William Reginald seems have been known by his second name. Reginald was at Oakham School between 1896 and 1900, and during this time was a prefect and rugby colour. After leaving school, he travelled to British Colombia, arriving in 1908. The census two years later reords that he was working on a farm and boarding at the farm house. According to the census he was a canadian citizen but there is no date for his naturalization. As35 of the 50 people recorded on the page were born outside Canada and had arrived during the previous ten years, yet were all apparenty Candaian the accuracy of the census data is questionable.

Perhaps by moving to the far west of Canada, Reginald no longer felt in the shadow of his elder brother.

Regiald had joined the local militia. On 8 December 1914 he enlisted with the Canadian army at Victoria. The process involved a medical examination that measured his height as being 5ft 8inches which is about average for men at this time. He was noted to have grey eyes, brown hair and a fresh complexion which is surprising as he would have beeen out of doors most days. He also sported a tatoo on each arm, a dragon’s head on the right and a butterfly on the left. 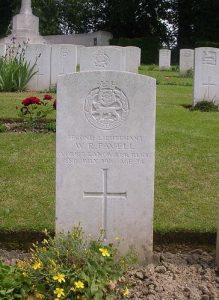 By the start of January 1915 and during training, he had been promoted to lance coproral but something was not quite right as in April he was discharged as ‘undesirable.’

William then returned to Britain and enlisted into the 4th (Hallamshire) Battalion, The York and Lancaster Regiment and was a 2nd Lieutenant from 4th July 1915. On 21st October the London Gazette announced his promotion to Lieutenant.

William was killed in action on the second day of the Battle of the Somme (2nd July 1916) and is buried at Authuile Military Cemetery.

There is a memorial on the grave of his parents, Richard and Ada,  at Fulwood:

Also of his son William Reginald 2nd Lieut 4th Battn York and Lancs Regt
Killed in action in France July 2nd 1916 aged 34.
“Make them to be numbered with the saints in glory everlasting”

He is also remembered on the plaque at St. Mark’s Church in Broomhill.