Ordinary Seaman John Doyle was born in May 1900 to Albert and Blanche Doyle. The record of his baptism at the Cathedral (then the church of Saints Peter & Paul)  states that Albert was the landlord of the Swan Hotel on West Bar. In 1911, The family which consisted of of Albert, Blanche, John and his brother William  was at the Phoenix Hotel on the corner of Union Street and Charles Street, just off Pinstone Street. 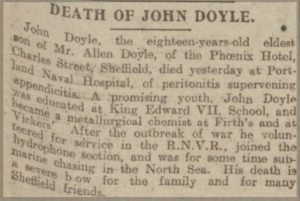 There was a short obituary in the Sheffield Telegraph from which we learn that John went to King Edward School, afterwards working for Firth & Vickers Steel as a metallurgical chemist.
John joined in the Royal Naval Reserve in May 1918. He served in H.M. Trawler John Cooper and was ‘submarine chasing’  according to the obituary. This was probably for a short time as his service record notes that his initial training lasted until August and this was followed by a period of ‘Research’ until 8th September. After the Armistice, the vessel was based at Portland 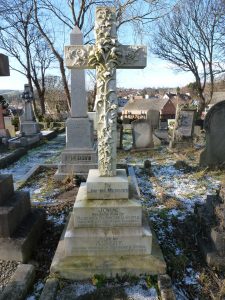 John died on 19 January 1919 of peritonitis at the Naval Hospital and is buried in Fulwood Graveyard. The inscription reads:

The grave also contains the bodies of his parents but not his brother who by 1939 was living in Margate and working a bus driver.