Henry Eric Dixon was the son of Albert Edward and Henrietta Beatrice (ne Maxfield.) Albert was the son of Henry Isaac Dixon of Stumperlowe Hall, hence the connection with Fulwood. Henrietta was the daughter of Henry Oates Maxfield who was a solicitor and may well have been instrumental in Albert’s training. Albert and Henrietta were married at Broomhill in 1889 by which time Albert was practising in Cardiff.

The family maintained their connections with Sheffield, returning for the baptisms of Henry and his brothers Gerald (b1892) and Cyril (b 1894) at St. Mark’s Church where the boys’ parents had been married. The fourth son, Hugh (b 1896) was baptised in Cardiff as perhaps the prospect of a journey to Sheffield with three young boys was thought to be too much. Albert Edward died in August 1901 at his Cardiff home but is buried in Fulwood Graveyard.

Henry Eric was educated at a preparatory school in Littlehampton before attending Bradfield College in Berkshire from 1903 until 1908. Like most young men, he was a member of the schools’ Officer Training Corps and was an all-round sportsman. He spent two years at Leeds University studying engineering before joining the Wolseley Tool and Car Company in Birmingham. In 1911 he was boarding with George and Kate Woollam in Sutton Coalfield, giving his occupation as a motor engineering apprentice.

By 1914 Henry Eric was employed by the Cleveland Car Company in Darlington. This company had been set up by “Charles Dixon, the owner of Cleveland Bridge, and Owen Pease because they had nowhere to service their motor cars – Mr Dixon had a Rolls Royce Silver Ghost” (The Northern Echo 9th March 2019). Charles Dixon was Henry Eric’s uncle so it is likely he asked his nephew to take a leading role in the car company. The Cleveland Bridge Company was set up in 1877 with Henry Isaac Dixon, merchant, and Henry Ernest Dixon, gentleman, both of Sheffield as the main shareholders. The company was responsible for the Tyne Bridge in Newcastle and the Middlesbrough Transporter Bridge among many other landmark bridges.

When war was declared Henry Eric joined the Middlessex Regiment and by December 1914 was commissioned into the 16th Battalion which was comprised of former public schoolboys and university men. The battalion was in France by the end of the year.

He was back in England early in 1916 when he was summoned before the magistrates at Beaconsfield. On 6th February he had been travelling from ‘the coast’ back to Northampton where he was stationed with the 24th Battalion when he was stopped by Police Constable Knibbs because his lamp was giving out too much light. Henry Eric told Inspector Dibben that the tissue paper he had placed over the lamp had burned off. For this mis-demeanour he was fined 10 shillings. Although we don’t know where along the coast he had been, his route suggests it was the south coast, the journey would have difficult along roads more used to horse drawn vehicles and with little lighting.

His journey may well have been to see Muriel Metford who he married in November 1916 at Lancaster Gate in London. The second daughter of Francis Killigrew Seymour and Agnes, Muriel was born in Gloucester where her father was as a flour miller. The description of Francis’ occupation was an understatement as he likely owned the mills. Muriel grew up at Whaddon Manor along with her elder sister, Beatrice, and her younger brother, Cecil. Francis was a member of the Gloucester board of guardians and its education committee. He was also an officer with local volunteers.

In May 1916, Henry Eric transferred to the Royal Flying Corps joining the newly formed 62 Squadron at Filton, Gloucestershire. He completed pilot training “with distinction” (Gloucester Journal 25 August 1917) The squadron had Bristol F2B planes and it was probably one of these that Henry Eric went to collect from Coal Aston Airfield on 11 August 1917.

62 Squadron was formed at Filton, Gloucestershire in August 1916 and was posted to France in late 1917 but it seems Dixon remained in the UK. In August 1917 he was severely injured when the aircraft he was piloting crashed on take-off at a North Midlands airfield, presumably the exact location had to remain a secret. The Inquest found that either a problem with fuel supply or another defect in the engine meant there was insufficient speed which in turn caused the aircraft to nose dive from about 300 feet. Dixon sustained multiple fractures and died a week after the crash. 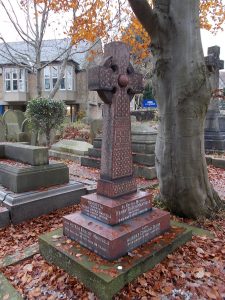 The Maxfield Memorial. The inscription remembering Eric Dixon is obscured by the tree

Dixon’s death was recorded by the registrar at  Ecclesall Bierlow.  This suggests that he had been at the military hospital at Collegiate Crescent, or one of its satellites, and thus his funeral took place at Fulwood. As a scion of the Dixon family the event attracted the attention of the newspapers. The cortege left his grandmother’s home in Broomhill escorted by about 250 men of the Royal Flying Corps and led by the Corps band. Arriving at the church, the coffin which was draped in a Union Flag and carried Dixon’s hat and sword on top was met by a 40 strong firing party lining the path to the church door. The service was led by a chaplain to the military hospital (confirming that Dixon had died in Sheffield) and the parish curate. At the grave, three volleys were fired and buglers of the Royal Engineers.

Henry Eric Dixon was laid to rest in a grave on the north side of the church. The grave belonged to his maternal grandfather, Henry Oates Maxfield, whose burial was the first. Later the grave received the bodies of Alfred Ernest Maxfield (son of Henry Oates), Albert Edward Dixon, Henry Eric’s father and husband of Henrietta (Nee Maxfield). The monument has a memorial on the right side:

In 2021, the monument was moved from the grave which was then covered by an access road. The monument was repositioned in a crowded area about 10 metres to the north of its original position, along with others similarly displaced. It is no longer possibly to walk around the monument