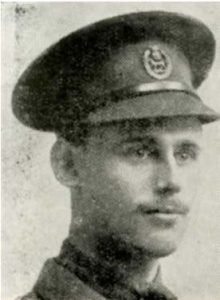 2nd Lieutenant Kenneth Leonard Cole was born in Sheffield on 19th October 1893. He was the only son of Thomas and Florence Cole, of Hill Crest, Ranmoor.

Thomas Cole was a member of the family who owned and ran  ‘Coles Brothers’ the pre-eminent department store in Sheffied in the Twentieth Century.

Leonard (for this was the name he was known by) was educated at Eastbourne and Leys School, Cambridge. On leaving school in 1911 he joined the family firm. He was a lieutenant of the Boys Brigade based at the Victoria Hall Methodist Church where his family were members.

He applied for a commision within days of the decaration of war and joined the 3rd Battalion of the York and Lancaster Regiment early in September 1914 . The record describes a healthy young man who was nearly six feet tall, slim and with dark blue eyes and brown hair. He was gazetted as 2nd Lieutenant on 29th September, joined the 3rd Battalion at South Shields on 6th October and served with the Expeditionary Force in France and Flanders.

In April 1915 Cole was attached to the 1st Battalion, The East Surrey Regiment. This regiment had suffered many casualties in the battle for ‘Hill 60‘ so Cole and others ‘were required to make good officer losses’ (Sheffield Daily Telegraph 11 October 1915.) He transferrred back to the 1st Battalion in August.

News that Leonard was wounded on 30th September reached his widowed father and his sister a few days later. There followed an anxious wait for further news. Thomas sent a telegram to the War Office seeking further news on 6th October: ‘Regret your wire that 2nd Lieut K L Cole is wounded please send further information when possible where is he?’ and received a reply that no further news was available. However, a note on Cole’s service record recorded that GHQ had reported him as ‘missing believed killed on 8th October 1915’. He sent another telegram on 9th November. Thomas received a further telegram, not dated, that stated his son was now reported missing. Finally on 18th November, Thomas received the telegram that told him his son had been killed on 29th September. 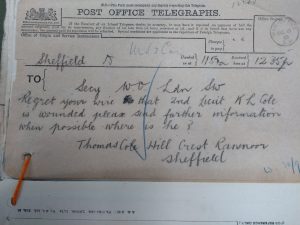 Kenneth Leonard Cole was killed in action near Loos 29th September 1915. His Colonel wrote: ”He was killed in a charge. He was most plucky in leading his men to the attack when he fell, and there is no doubt that he and some of his brother officers showed the utmost courage and by example spurred their men on to re take a lost trench. Their objective was achieved, and the regt. was specially picked out for praise by the Divisional Commander for their splendid work. Your son had not been long with this battalion, but quite long enough for me to appreciate what a hard working, promising officer he was. ” (taken from a commemoration book of employees of Cole Brothers)

The War Office had, of course, to deal with the aftermath of a soldier’s death. For Cole there are records that show he had no outstanding debts. This record, dated March 1916, also noted that ‘This officer’s body has not been recovered’.

The is an inscription on the grave of his parents in Fulwood graveyard: