James was born in august 1898. His parents were John and Martha Broomhead. John was a quarry man as recorded in both the census of 1901 and 1911. In the latter census James was recorded as being an errand boy, perhaps at one of the new shops on the opposite side of the road.

John and Martha began their married life at Jeffrey Green before moving to 481 Fulwood Road, a cottage just above the Rising Sun where the Tesco Servce Station is now. 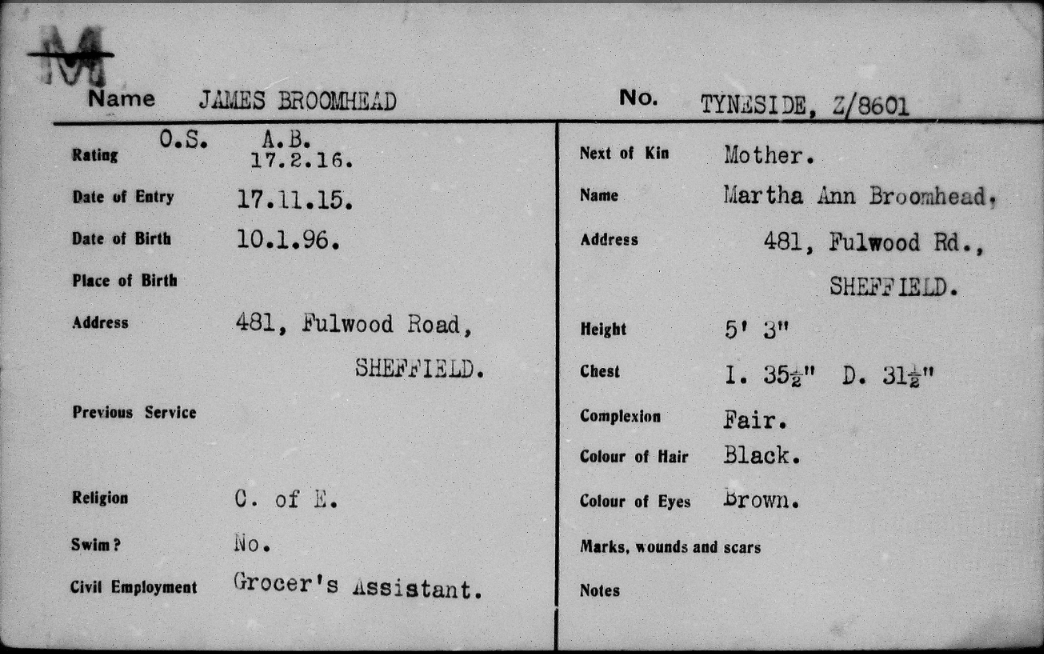 James was called up in November 1915. He joined the Royal Naval Volunteer Reserve and his record card shows that he was a small young man. With a height of just 5′ 3″ (158cms) he was 3″ (7.5cms) below the average height for men at the time. The description of James on the record card is somewhat general, most records seem to describe the recruit’s complexon as ‘fair’.

Although his mother is named as his next of kin, James’ father was still alive (he died in 1943)

James must have shown some ability and initiative as he gained his first promotion to Able Seaman within three months of joining up.

James Broomhead was killed on 27th April 1917 aged 21 years whilst manning the siege guns at Dunkerque and is buried at Coxde Cemetery in Belgium. He was awarded the Croix de Guerre by France, having been ‘mentioned In French Divisional Orders No. 259. Of 1st Mayy 17′ according to his casualty record. His younger brother, Stephen Fox Broomhead, was killed a year later

He is commemorated on the memorial at Fulwood.

There are three men named Broomhead on the Fulwood memorial. James and Stephen Fox were brothers. Their common ancestor with Herbert is their great-grandfather