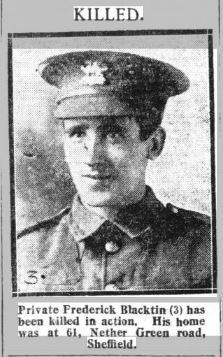 Frederick Blacktin was the youngest son (and one of 5 children) of Joseph, a quarryman, and Elizabeth Blacktin who had come from Warwickshire. He was born in the autumn of 1891 when his family was living near Whiteley Wood Hall. They moved to Oakbrook Road into the house that is now the Kitchen Design Shop.

By 1911, Elizabeth had been widowed and Frederick was employed as a chauffer, perhaps by one of the families living in the large houses in the area, and in 1916, the family was on Nethergreen Road.

He was with the East Kent Regiment in March 1916 when he was killed in action. The news may have taken some time to get to Sheffield as it was 5 weeks before notices appeared in the papers.

Frederick is recorded on the grave of his parents in Fulwood graveyard. It is a simple statement:

Also of Pt Frederick Blacktin
who was killed in action in France
March 5th 1916 aged 23 years.

He is also recorded on the Loos Memorial and at Fulwood.