The youngest of 6 children, Clement Stanley Binns was born in the autumn of 1884 to George and Mary Binns. Clement was the youngest by seven years following 5 siblings who had arrived at two year intevals, so he may well have been treated as the ‘baby’ of the family.

George was a clothier and outfitter according to the census of 1881 and subsequent ones. He owned a shop that was still trading on Cambridge Street in the 1960s.

In 1891 five of the siblings (Charles was at school) were staying with Ann White in Bubnell Hall Farm at Baslow whilst their parents were on holiday abroad. Ten years later it was Clement who was boarding at Ash Ville College in Knaresborough. 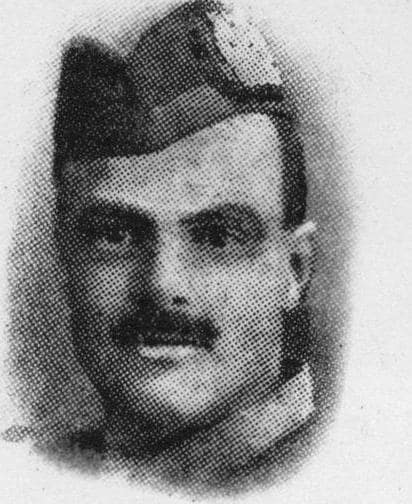 While his elder brothers, Charles WIlliam and Arthur George, were involved with the family business, Clement trained as a solicitor qualifying in 1908. He and practised in partnership with another solicitor called Newsom.

Charles, Arthur and Clement were all living at home in 1911, along with their sisters Gertrude and Beatrice. The only sibling to have married was Albert who in 1911 was living at Lytham St Annes with his wife and duaghter. The census recorded him as being of  “independent means” which may indicate that he was not in good health.

Clement married Ruth Victoria Whitney, the daughter of the late Colonel Charles Whitney of Liverpool in May 1914. They had two children: George (b May 1915) and Lorraine (born April 1916)

Clement was a member of Hanover Methodist Church and there are reports in the local newspapers of him taking part in fundraising social events when he would recite extracts from Shakespeare’s plays.

At the outbreak of war, Clement joined the newly formed Chief Constable’s Civilian Corps in the role platoon commander. The Corps was a forerunner of the Home Guard of the 1940s. He was ‘gazetted’ as a 2nd Lieutenant in 1915 with the 20th Northumberland Fusiliers.

He was killed in action on 1st July 1916 aged 31 years and is commemorated on the Thiepval Memorial. There is also a memorial on his family grave on Fulwood graveyard:

also in proud & loving memory of Clement Stanley Binns, 2nd Lieutenant 20th Northumberland Fusiliers (youngest son of the late George Binns, and devoted husband of Ruth Victoria Binns.) killed in action at La Boiselle, France, (Battle of the Somme) July 1st 1916, in the Great European War for freedom and civilization; 1914-1918 aged 31 years
“greater love have no man than this, that a man lay down his life for his friends.”
St John xv,13.

After Clement’s death, Ruth, Lorraine and George moved to Eastbourne where Ruth died in 1949. George Married Diana Davies in the summer 1939 and were living in York at the ourbreak of war. George was a surveyor and land agent.