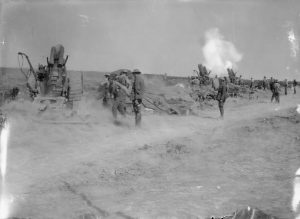 Like so many men who served in the First World War, there is little detail of his life in the records.
He was born at Nether Green in February 1891 to Thomas and Harriet Barber. Thomas was a joiners’ tool maker, a trade that George would also practice.

George’s mother, Harriet was born in Navenby, a village lying south of Lincoln – a place that would be significant in George’s life.

Like his four elder sisters, George was baptised at Fulwood church when he was three months old. The family moved to one of the cottages on Slayleigh Lane sometime before 1899. Unfortunately, the census records are not specific as to which of the cottages.
George would have attended either the Church school, in the grounds of the Church or the Board School on David Lane before learning his trade alongside his father. We know that Thomas and George were working ‘at home’ in 1911 as this is recorded in the census of that year. There was only Thomas, George and Florence at home because Harriet Jane had died at the end of 1898. Florence had married William Willoughby in 1906, Nellie had married Ernest Frost in 1902 and Alice had married Arnold Drabble, a furnace man in the Steelworks at Kimberworth.

Unfortunately, George’s Service Record has not survived; it was probably lost when over 60% of the 6 million records were destroyed in 1940. So we don’t know when he enlisted.

Most of the details we do have come from the CWGC record for him. George Barber died on 3rd December 1917. He is buried at Ribecourt, a vallage 10KM from Cambrai. The CWGC is specific about the cause of death, using terms such as ‘killed in action’ and ‘died of wounds’. In George’s record, the term ‘died’ implies that he died of illness rather than through enemy action. The CWGC record notes that their contact was “Mrs L Barber, c/o Mrs Hunter, Navenby, Nr Lincoln.” – Letitia had returned home. There were no children of the marriage.

There is a detailed account of the 135th Battery here. From this and the CWGC record it is possible to construct a history for George.

Soon after the outbreak of war, he enlisted. After basic training he found himself on the coastal defences north of Newcastle-on-Tyne. He married his sweetheart, Letitia Toynbee, in December 1915 in Lincoln. He had known Letitia for some time through his mother’s connections with Navenby. The 135th Brigade was formed in the early summer of 1916 and was on the Western Front soon after. The 135th Battery remained on the Western Front for the duration of the War. George fell ill sometime in November and was hospitalised. He died early in December.